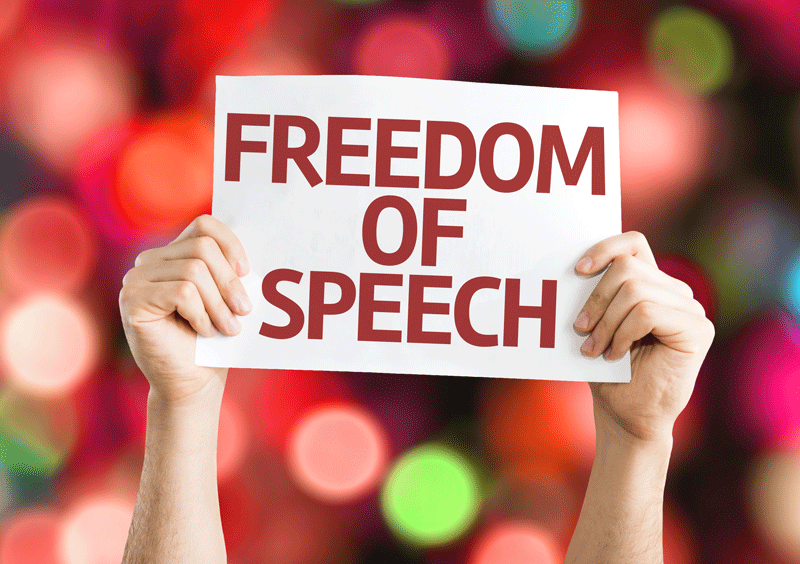 The world’s richest man has made his move to purchase Twitter, the social media giant that has once been called ‘The Global Public Square.’ Its reported censorship of conservative voices and its influence on public policy and elections have put it under the microscope. Musk’s actions are more than about the acquisition of a high-profile company – it could be a game-changer, a culturally significant event that champions a return to free speech, the bedrock of all human rights.

For the longest time we who grew up in the western world took it for granted. But today there is strong evident this same right is under threat. The threat is not external but internal, the result of a half-century culture war.

The political/cultural Left seek to silence their political opponents, rather than debate them publicly; a very undemocratic stance. Why are they doing this? They are afraid their utopian ideas may not be accepted in the town square debate forum nor at the ballot box. So they have used the courts, hate speech laws, media, including social media, and the corporate world to suppress opponents and deliver for them the outcomes that the democratic process will not.

The road from free speech to censorship had a beginning. When Hillary Clinton lost the 2016 US Presidential election, the Left complained about ‘Russian collusion’ and ‘fake news.’ Pressure was put on social media to ‘moderate content’ and ‘fact-check’ information. ‘Inconvenient’ news stories were suppressed. All these actions meant that conservatives voices were being silenced, no matter how reasonable and factual they may be. Thus the era of social media censorship began in earnest, culminating in the 2020 US Presidential election.

Again, when free speech dies, so does democracy. No free speech, no freedom; it is that fundamental.

Not long ago Musk, who has two million followers on Twitter, had a poll and asked the question:

Free speech is essential to a functioning democracy.

Do you believe Twitter rigorously adheres to this principle?

This poll shows that, despite the pretence of even-handedness, social media is perceived to hinder, not facilitate, free speech.

Remember that Twitter made a historic contribution to speech and the exchange of ideas. People from one side of the world could read and communicate with others on the other side, including the rich and famous. ‘Tweeting’ and ‘tweets’ became household words. Donald Trump with eighty-eight million Twitter followers drew even more attention to the social media outlet. It became his direct microphone to the people, even as President, often bypassing the America mainstream media.

Cancel culture set in and the censorship started to bite. Trump himself was permanently banned from Twitter after the events of 6 January 2021. Parag Agrawal, the new CEO who took over from Jack Dorsey in November 2021, said that Twitter’s role was not to be ‘bound by the First Amendment,’ but to serve ‘a healthy public conversation’ of the things ‘we believe.’ This makes it sound more like a monologue than dialogue. Twitter content moderation, fact-checking, and story suppression are seen as synonymous with censorship.

Under Musk’s leadership, Trump will be reinstated to Twitter, if he wants. This seems unlikely since he started his own social media company, Truth Social. GETTR, GAB, RUMBLE, PARLOUR, also offer a ‘free speech’ alternatives to Twitter.

Remember that ‘free speech’ is not just a good idea; it is the law of the land. Let’s look at the First Amendment to the United States Constitution.

Congress shall make no law respecting an establishment of religion, or prohibiting the free exercise thereof; or abridging the freedom of speech, or of the press; or the right of the people peaceably to assemble, and to petition the Government for a redress of grievances (emphases mine).

Ben Shapiro, a well-known conservative commentator from The Daily Wire, is urging Musk to fire the thousands of Twitter workers since they have ‘cancel culture blood on their hands.’ Ninety-nine percent of them donate to Democratic Party and present a danger of forming a ‘deep state’ among the employees who could seek to undermine his free speech goals.

For decades the far Left, dominated by cultural Marxists and secular progressives, have exercised cultural dominance in major areas of society: in the media, art, entertainment, music, education, corporate board rooms and school boards. Dr. Steve Turley boldly predicts that the dominance of the Left is coming to an end thanks to Elon Musk and his move to buy Twitter. It is viewed as a most consequential event. Even if the sale does not proceed, Musk has strongly rattled the cages of censorship.

Bertrand Russell once put it: “The whole problem with the world is that fools and fanatics are always so certain of themselves, and wiser people so full of doubts.”

Musk’s acquisition of Twitter could change all that. People of tradition, family and faith may actually find their voice again.

The position of this ‘quasi-libertarian’ billionaire and ‘free speech absolutist,’ a Democrat who has become a Republic, at the helm of a power social media platform is a cultural earthquake – just like the potential overturning of Roe v. Wade. If Musk succeeds in liberating speech, buckle up for the ride ahead.