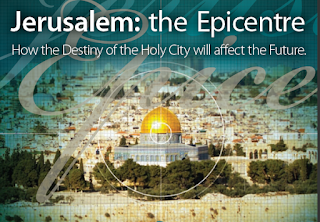 Zechariah calls Jerusalem ‘a burdensome stone for all people.’ Whoever messes with it will be cut in pieces, even though all the people of the earth be gathered together against it (Zechariah 12:3). Could the whole world be obsessed with the holy city to the point of global conflict? Judging by the amount of international attention this city already receives – plus the uptake in violence – and you have a plausible scenario.

In Part 01 of this series, we learned that Jerusalem is the Number One foreign policy issue and will get increasingly more global attention in the days ahead. We also reviewed Jerusalem’s history from the time of its founding 4,000 years ago until the time of Christ. In Part 02, we reviewed Jerusalem’s history from the end of the Biblical period until today.

In this article, we will look at what is called ‘The Jerusalem Question.’

Among other things, the year 2017 will be remembered as the ‘anniversary year.’ It is the year of the 500th Anniversary (1517) of the Protestant Reformation, where the ‘just shall live by his faith’ and the Bible was recognised as the sole and highest authority regarding faith and practice. It is the 120th Anniversary (1897) of the 1st Zionist Congress of Basle, Switzerland, convened by Theodor Herzl. 2017 is the 70th Anniversary (1947) of the UN Partition resolution, dividing British Mandatory Palestine into Arab and Jewish states. June 2017 commemorated the 50th anniversary of the Six Day War and Israel’s capture of the Old City, the first time it has been under Jewish sovereignty for nearly 1,900 years.

1. Allied victory in Beersheba (October 31st) : With the help of the Australian Light-Horsemen, the town of Beersheba fell the Allies. This was be beginning of the end of 400 year of Ottoman Turkish rule, leading to the British Mandate of Palestine and the establishment of the State of Israel.

2. Balfour Declaration (November 2nd): Lord Arthur Balfour, British Foreign Minister, issued a letter to Lord Rothschild stating that His Majesty’s Government viewed with favour the creation of a Jewish national home in Palestine. Now the fledgling Zionist movement had the backing of the British Empire. Eventually, this declaration was incorporated into the League of Nations authorised British Mandate in Palestine.

(NOTE: 2017 is also the centenary of the February and October 1917 Russian Revolution and the birth of US President John F. Kennedy in May).

It is from this point that we begin to explore the Jerusalem question. For exactly 400 years, from 1517-1917, Jerusalem was under Ottoman Turkish rule. Turkey was the last internationally recognised legal owner of the holy city. From the time of the British conquest of December 1917 until now, however, the ownership of Jerusalem has been in dispute. Hence, we have the ‘Jerusalem Question.’

Remember, this question is not merely limited to Israelis and the Palestinians Arabs. Due to its location, history, and heritage, some major countries and organisations also claim a stake in Jerusalem. It was during the 19th Century that great powers established a presence in the holy city, usually by consulates, colonies and compounds. There was the German Colony, the American Colony, the Russian Compound (complete with hospice, hospital, and cathedral), French and British quarters as well.

Today, the following parties are involved in the Jerusalem Question, including: Israel, Palestinian Authority, the Arab League, the Vatican, the United Nations, the European Union, Russia, the United States, the Orthodox Church, the Muslim world through the Arab League and OIC. All these have their ‘fingers in the Jerusalem pie’ and all hold a veto. No wonder that over the last century, the 60 plus proposals of what to do with Jerusalem have failed to materialise because of the objections of one or more of these parties.

In the last century, apart from the Jerusalem Question, comes the actual situation on the ground. Here’s the history:

British Rule (1917-1948): During most of this period, Britain had a mandate in Palestine. This means they were internationally authorised to occupy the country and prepare the inhabitants for eventual independence. Initially, independence was to be given to the Jewish state but consistent Arab protests caused second thoughts. The British White Paper of 1939 was considered a repudiation of the mandate. Eventually, after the Second World War, Britain handed the problem of Palestine to the newly-formed United Nations in February 1947, who was authorised to determine its fate. The results was the UN Partition Resolution 181 of November 1947, dividing Mandatory Palestine into a Jewish and Arab state and consigning Jerusalem to an international regime to be administered by the UN

Divided City (1948-1967): While the Jews accepted the partition resolution, the Arabs rejected it out of hand. Jerusalem and Palestine’s fate was determined on the battle field. The 1948 Arab-Israeli War resulted in Israel gaining additional territory, including West Jerusalem; Egypt captured Gaza; Jordan the West Bank and East Jerusalem. When the UN asked Israel and Jordan to hand over their respective sectors to UN custody, they refused. Their argument: when Jerusalem was under siege, the UN was no where to be found. We defended it with our blood and now we will keep it!

Israeli Rule (1967-Present): In June 1967, Israel captured the Old City of Jerusalem and the eastern sector, which it annexed 3 weeks later. Though Israel has repeatedly affirmed that Jerusalem is its ‘eternal, indivisible capital’ and not subject to negotiations, Jerusalem still remains ‘on the table.’

Crux of the Matter

While the municipal boundaries of modern Jerusalem are large, the ‘real, original’ Jerusalem is the Old City. The 16th Century Turkish walls of Ottoman sultan Suleiman the Magnificent defined the city. Only in the 19th century did anyone live outside the walls. Thus the status of the Old City is the heart of the matter.

But it goes even further. There is 14 hectares of sacred space, known in Arabic as al haram al sharif and in English as the Temple Mount. No piece of real estate on earth commands so much attention. If the Old City is the body, the Temple Mount is the heart. Today, as it has been for much of the last 1,400 years, it has been under Muslim control, where the Dome of the Rock and Al Aqsa Mosque are housed. Yet the mount is considered the traditional site of the Jewish temples of Solomon and Herod. If ever there was a flashpoint, it would be the Temple Mount. Many times in its history, it has been the epicentre of unrest and riots; even the apostle Paul caused a riot by his very presence there (Acts 21).

The Jerusalem question dominates the world diplomatic agenda and the Old City and Temple Mount are the core. If you can solve these, we will have peace. But as one person aptly put it: ‘Jerusalem is a stick of dynamite and the Temple Mount is the fuse’ —TO BE CONTINUED