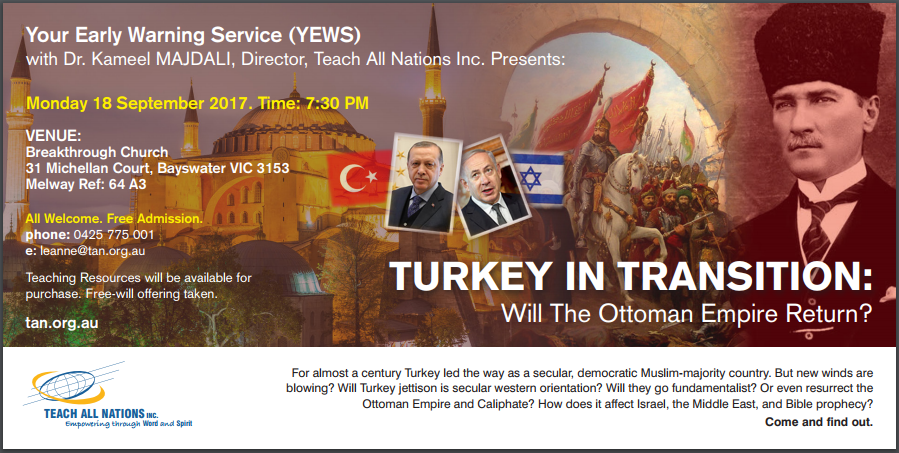 This is a public meeting, often hosted in churches, focusing on current events in the Middle East in the light of God’s Word. It seeks to provide a practical yet prophetic ‘early warning system.’ Early warnings save lives and souls.

Past topics have included:

Since 2007, YEWS has been held in Melbourne, Wangaratta, Brisbane, Perth, (and 30 other locations in Australia in all mainland states), Singapore, Malaysia, Sri Lanka, the Czech Republic, and United States.

This is the same as the ‘YEWS’ current events & Bible prophecy meeting, except it is done 4-5 times a week across different cities over a period of several weeks .

The ‘Understanding the Times’ (UTT) tour is an Australia-wide initiative, in partnership with Vision Christian Media (vision.org.au). Annually since 2015, Teach All Nations has travelled to major cities and regional centres in all Australian mainland states under the banner of UTT.

The goal of UTT: To inform and inspire people so that they will invest in their spiritual lives (Matthew 6:33). Nothing is more important than this!

Past Topics for UTT

2015: Ten Trends That Are Changing Our World Forever
2016: Seven Keys to Understanding the Future
2017: The Burdensome Stone: Jerusalem and the Middle East in the Age of Trump
2018: To be announced, but will involved current events in the Middle East and Bible prophecy.

In 2016, there was a smaller version of UTT (10 meetings) across South Moravia in the Czech Republic.
If you would be interested in hosting a UTT meeting in your area, please contact the following:

After this I looked, and, behold, a door was opened in heaven: and the first voice which I heard was as it were of a trumpet talking with me; which said, Come up hither, and I will show thee things which must be hereafter — Revelation 4:1