The Seventh Commandment – A Call for Moral Purity Part 01 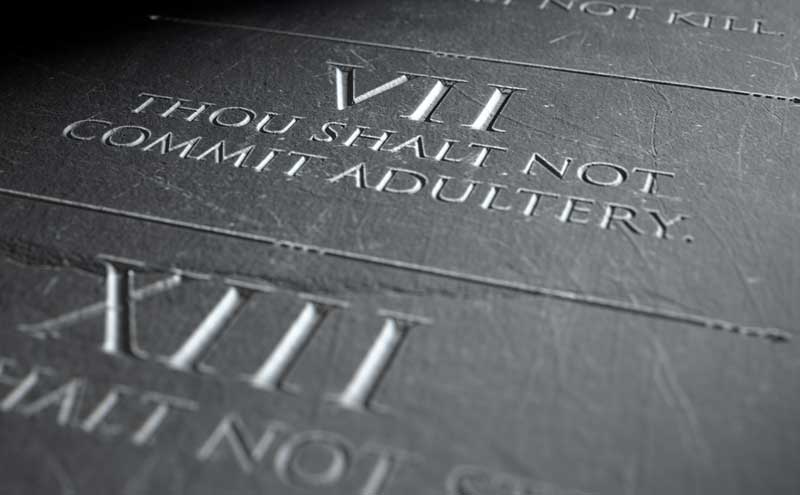 The Seventh Commandment – A Call for Moral Purity Part 01

It is a horrible sin which is even despised by non-believers. Scandalous, sensuous, and representing the ultimate betrayal, it can destroy the party involved and the greater family. Its evil effects can torment for years. If you get a chance to talk to King David, ask him why this sin should be avoided at all costs: there are whole chapters in 2 Samuel that show the heart-wrenching effects over long-term. It is impossible to find anything good from it.

This horrible sin is called ‘adultery’ and it has nothing to do with being an adult. Its prohibition is the subject of the seventh commandment: Thou shalt not commit adultery — Exodus 20:14

As always in any proper study, one needs to define key terms. The word ‘adultery’ is used 40 times in the Bible, with 23 references in the New Testament alone. It means voluntary sexual intercourse by a married person with another person who is not their spouse. The latter may or may not be married themselves.

A related term is ‘fornication,’ used 36 times in the Bible, 32 times in the New Testament. It is sexual intercourse between two people unmarried to each other or anyone else.

The Book of Proverbs, written by a polygamous Solomon, makes it clear that adultery is foolish and deadly. In Proverbs 6:32-35:

But whoso committeth adultery with a woman lacketh understanding: he that doeth it destroyeth his own soul. A wound and dishonour shall he get; and his reproach shall not be wiped away. For jealousy is the rage of a man: therefore he will not spare in the day of vengeance. He will not regard any ransom; neither will he rest content, though thou givest many gifts.

The New Testament is just as strong in condemning adultery and fornication,[1] though we will learn more about this later.

Adultery is considered a valid reason for divorce (though Christians should not race to the divorce courts if, God-forbid, it happens to them. Sometimes the ‘innocent party’ may not be so innocent after all. Or what is needed is grace and mercy in order to salvage the marriage – a worthy goal. Seek wise mature spiritual leadership: their advice and prayers may prove to be a Godsend).

We will explore Jesus’ attitude on the matter in the next article.

Adultery is so horrible because, in part, it pollutes far beyond the couple and their ungodly liaison. There are three important victims in adultery. They include:

And after a time his master’s wife cast her eyes on Joseph and said, “Lie with me.” But he refused and said to his master’s wife, “Behold, because of me my master has no concern about anything in the house, and he has put everything that he has in my charge. He is not greater in this house than I am, nor has he kept back anything from me except you, because you are his wife. How then can I do this great wickedness and sin against God?” (emphasis mine)

Even casual adultery, including a one-time incident, let alone serial adultery, can have serious and damaging life-long effects.[5] Just look at the second part of David’s reign from 2 Samuel 11 and onwards; it was adversely affected by his one-night stand with Bathsheba, followed by the premeditated murder of her husband Uriah the Hittite. When you weigh it all up, it is simply not worth it.

Adultery is not some virus in the air that one catches and then falls. It begins with pondering and persistent thoughts,’[6] that will be acted upon if and when opportunity presents itself. Even if there is no physical opportunity, the thoughts alone can be damaging enough.[7] Spiritual adultery is often the precursor of physical adultery.[8]

In our next article, we will explore the attitude of Jesus and the New Testament towards the sin of adultery. If you have been damaged by either divorce or adultery, there is hope. See you next month!