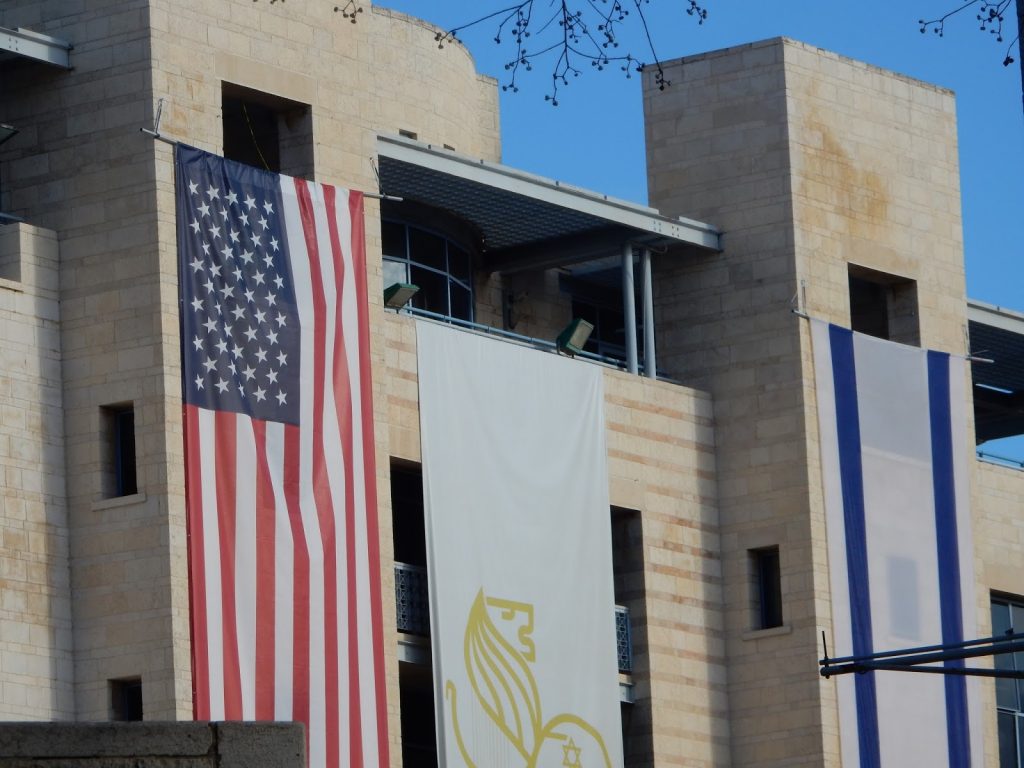 May 4, 2018Teach All NationsBlog
Therefore, I have determined that it is time to officially recognise Jerusalem as the capital of Israel — US President Donald Trump
You would have thought the sky had fallen!
( US & Israeli flags at the Jerusalem Municipality. Courtesy of Teach All Nations)
US President Donald Trump, no stranger to controversy, made a simple statement on 6 December 2017, stating that the United States recognises Jerusalem as Israel’s capital. Mr. Trump was honouring a campaign promise, which some of his predecessors also made but did not fulfil.
Though Trump sought to be calming, even-handed, and concilatory, there was a strong reaction from key parties. When it comes to Jerusalem, it can be a very emotive. In this article, we will find out who cares about the issue.
Before making his statement, President Trump called Egyptian President Sisi, Jordanian King Abdullah, Saudi King Salmon, and Palestinian Authority President Abbas, explaining his actions. He confirmed that the US is still open to the internationally-endorsed ‘two state solution,’ meaning the holy land is to house two nations for two people, ‘living in peace side-by-side.’ What is not directly stated, but implicit, is that along with ‘two states’ there is also to be ‘two Jerusalems,’ one city but divided into two capitals for two peoples.
The 1995 Jerusalem Embassy Act overwhelmingly passed in the US Congress, 374-37 votes in the House of Representatives and 93 to 5 votes in the Senate. In 2017 the act was symbolically passed again unanimously in the Senate. It stipulated that Jerusalem is the capital of Israel and that the American embassy should be re-located there. However, the President can postpone the move every six months to ‘protect the national security interests of the United States.’ Then US President Bill Clinton signed the twice yearly postponement waiver for the rest of his administration. George W. Bush and Barack H. Obama did the same.
Mr. Trump has gone against decades of US policy vis a vis Jerusalem. America has refused to publicly recognise the holy city as Israel’s capital and has kept the embassy in Tel Aviv, 65 kilometres away, as are all foreign missions. Americans born in the holy city have only ‘Jerusalem’ written in their passports, not ‘Jerusalem, Israel.’
Yet, while de jure recognition of Jerusalem as Israel’s capital has been denied, de facto has been operative for years: US presidents, secretary of states, and military leaders have met with their Israeli counterparts in the holy city.
The reason for this ambiguous policy is that Jerusalem is a hyper-sensitive issue with the Arab and Muslim worlds; therefore, its final status should be determined by negotiations. If and when that happens, then embassy might be moved, either to a united or divided Jerusalem. Trump believes this long-term ambiguity vis a vis Jerusalem has not worked, will never work, nor has it brought peace any closer; It is time to face facts and move on.
Mr. Trump said that his move was merely a ‘recognition of reality.’ What is that reality? In a population of 880,000, the Jews number 563,200 (64%), and Arabs 308,000 (35%). Jerusalem has been Israel’s declared capital since 1949, just as it was for a thousand years from the time of King David (1000 BC) to the time of Christ (70 AD). This capital status is mentioned frequently in the Bible, along with 100s of references to Jerusalem. It serves as the seat of government. Israel’s parliament, The Knesset, the Supreme Court, government ministries, official residences of the President and Prime Minister, are all located in Jerusalem.
From the Arab point of view, they are the majority of the population in the Old City, which is the historic, original Jerusalem (30,000 Muslims, 5,600 Christians, 3,000 Jews). They also possess 14 hectares of sacred space known as Al Haram Al Sharif (the ‘Noble Sanctuary’), known in English as the Temple Mount, arguably the single most important piece of real estate in the world. Though historically Jerusalem has never been the capital of any Muslim or Arab entity, the Palestinians say that it will be the capital of their future state.

So who cares about this declaration?
Apparently the entire world!
First, the mainstream US media attacked the President for being ‘reckless.’ This reaction should surprise no one.
The Pope urged him to respect the status quo, namely, ambiguity and keep the American embassy in Tel Aviv. Britain’s Theresa May and other European leaders spoke of the move as being ‘too risky.’ Sweden’s foreign minister called Trump’s declaration ‘catastrophic.’ Russia and China are nervous, too.
UN Secretary General Antonio Guterres reiterated that the ‘2-state solution’ to peace with Israel/Palestine is the ‘only way’ to solve the Arab-Israeli conflict. There is no ‘Plan B.’
The Palestinian Authority vigorously condemned the move, called for a ‘days of rage.’ Hamas, who rules the Gaza Strip, said Trump’s statement ‘opens the gates of hell.’
At an emergency meeting of the 22-member Arab League, they denounced Trump’s move as a ‘shameless attack’ on the Arab nation, the rights of the Palestinians, and of all Muslims and Christians. They warned that recognition of Jerusalem as Israel’s capital threatened regional peace and stability.
Turkey, whose previous Ottoman Empire occupied Jerusalem for 400 years (1517-1917), declared any change of status in Jerusalem would be a ‘catastrophe.’ Protests were held from Beirut to Jakarta.
Yet, at a local level, things were relatively calm. Yes, there were demonstrations here and there but nowhere nearly as expansive or ferocious as was anticipated. This author happened to be in the country when the Trump’s declaration was made. From personal observation, it was ‘business as usual’ in key cities like Bethlehem and Jerusalem. Life can and will go on.

When it comes to Jerusalem, it has the distinction of holding ‘universal name-recognition’ and international concern. From the Amazon Basin to the highlands of Papua New Guinea, the whole world knows about Jerusalem. Since the mid-19th Century, major western powers have established a presence, consular and otherwise, in Jerusalem.
Concerning the status of Jerusalem, the current stakeholders include (but are not limited to):
•    Israel
•    Palestinian Authority & Hamas
•    The Arab League
•    The United Nations
•    The United States
•    The European Union
•    Russia
•    The Vatican
•    Iran & the ‘Shiite Crescent’ from the Persian Gulf (Iran) to the Mediterranean (Lebanon), & Shia Islam
•    Organisation of Islamic Cooperation (OIC)
•    The Orthodox Church (they own much land in the holy city)
•    The Jewish world
These parties all claim a vested interest. In theory, many, if not all, can have a veto over any agreement involving ownership of the holy city, which has been undecided since the Ottoman Turks lost it to British General Edmund Allenby in December 1917.
Analysis of The Trump Jerusalem Declaration
On reading Trump’s Declaration on Jerusalem, he still pledges openness to the ‘two-state solution,’ if both parties want it. Also, the President recognised Jerusalem as Israel’s capital but did not use the phrases ‘united’ and/or ‘undivided.’ This also, in theory, leaves open the possibility of the redivision of the holy city into two capitals.
He gave no timeline for when the embassy will move. Nor did he offer to immediately convert the current US consulate in Jerusalem into an embassy. Apparently, he also signed the December 2017 waiver postponing the move of the embassy for another 6 months, as he did the first time in June 2017.
So it appears that Trump’s declaration was more symbolic than substantive. Yet, make no mistake about it, symbols can be very potent. Jerusalem testy status makes that plain.
If the world were committed to a two-state, two-capital solution, why the fuss of recognising Israel’s sovereignty at least over part of Jerusalem? Could it be that major stakeholders object to Israel’s rule over any part of Jerusalem, not just the whole?
Twenty-five hundred years ago, the prophet Zechariah (12:3) warned the world that Almighty God would make Jerusalem a burdensome stone for all people. Are we seeing a fulfilment of that prophecy before our very eyes? For seasoned observers, there is no doubt that this city will continue to concern and confound the nations in the days to come. Just keep watching this space.