An Earthquake?: The Freedom Convoy & the ‘Two Canadas’ 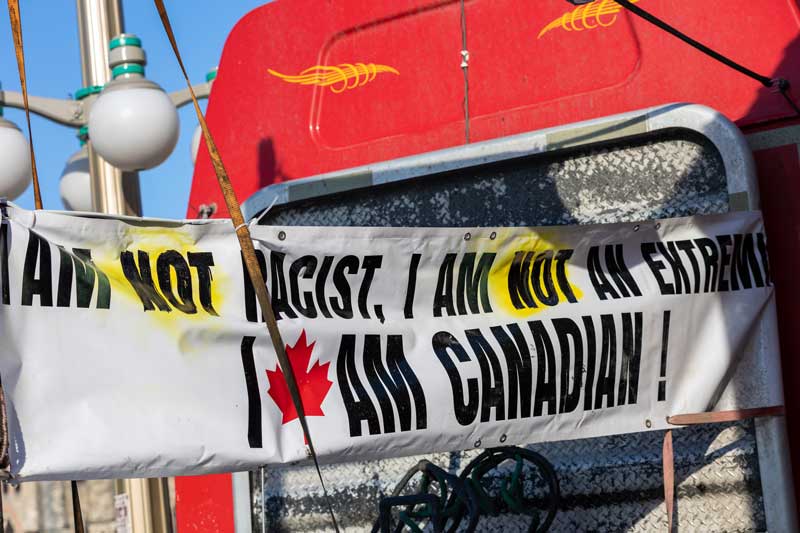 An Earthquake?: The Freedom Convoy & the ‘Two Canadas’

An earthquake is going on – politically, socially, even spiritually, in great, prosperous, and scenic nation of Canada. The Freedom (Truck) Convoy, which seeks the abolition of nation-wide vaccine mandates for truckers – and the strong reaction from the Trudeau government – has revealed a geological fault line in Canadian society.

This story is on-going and worldwide. Though the convoy has been dispersed in Ottawa by the police, the question remains: Could this crisis spotlight the prospect of ‘two Canadas?’

An earthquake is going on – politically, socially, even spiritually, in great, prosperous, and scenic nation of Canada. The Freedom (Truck) Convoy, which seeks the abolition of nation-wide vaccine mandates for truckers – and the strong reaction from the Trudeau government – has revealed a geological fault line in Canadian society.

This story is on-going and worldwide. Though the convoy has been dispersed in Ottawa by the police, the questions remain: Could this crisis spotlight the prospect of ‘two Canadas?’ What can the Christian do to help?

During the uncertain and troubled early days of the Covid-19 pandemic, Canada recognised and applauded a certain group of ‘essential workers.’ While the rest of Canada was at home in lockdown, these men were out on the road delivering food and supplies nationwide.

One man tweeted on 31 March 2020 – when there were no vaccines – ‘“While many of us are working from home, there are others who aren’t able to do that–like the truck drivers who are working day and night to make sure our shelves are stocked. So, when you can, please #ThankATrucker for everything they’re doing and help them however you can.” The author of the tweet? Canadian Prime Minister Justin Trudeau.

That was nearly two years before the Freedom Convoy rolled into Ottawa. How things have changed!

While other Anglosphere countries like Australia and New Zealand have enacted draconian Covid restrictions, it is arguable that during the last two years Canada has revealed an alarming move towards authoritarianism. During this time pastors have been arrested and jailed and churches burned. The ‘temporary’ suspension of freedoms seems to have become indefinite. It is clearly a departure from democratic norms. And that’s before Justin Trudeau invoked, for the first time ever, the Emergencies Act on Valentine’s Day 2022.

With the pressure of the pandemic, the trend of two-Canadas that has been brewing for years, is now bubbling to the surface. After all, you won’t know the colour of the toothpaste until you squeeze the tube!

The Canadian ‘Freedom Convoy’ was a spontaneous, grassroots, ‘made in Canada’ movement. It has been called a ‘human rights protest’ or ‘demonstration.’ Starting from Vancouver, British Columbia in the west, over 50,000 truckers drove a convoy that was seventy kilometres (forty-three miles) long towards the national capital of Ottawa, honking their horns on the way. Their demand: remove the vaccine mandate on truckers, instituted on 15 January 2022. ‘Unvaccinated Canadian truckers,’ who travel repeatedly to the USA, would be forced to quarantine thus incurring a loss of income. Since most of the truckers are vaccinated, this was not an ‘anti-vaccine’ protest – it was an ‘anti-mandate’ protest. The truckers have promised to uphold ‘non-violence’ in their actions and all they want is ‘freedom.’ Remove the mandates and they’ll go home.

Upon their arrival in Ottawa, they parked their rigs and set up camp. With food stalls and jumping castles for the children, it is more like a street party than a normal protest. Admittedly, they could have been parked illegally.

However, there’s more: some truckers have blockaded several US-Canada border crossings, including the all-important Ambassador Bridge between Detroit, Michigan and Windsor Ontario, where twenty-five percent of all cross-border trade occurs (the bridge has since been cleared). This could be considered a form of civil disobedience.

What has been the results of the Freedom Convoy so far?

The convoy has brought into clearer focus the fact that there are ‘two Canadas.’ The first is called ‘Progressive Canada’ (Neo-liberal is another label). Simply stated, progressivism says ‘big government’ will meet all your needs and keep you safe’ in exchange for higher taxes and total compliance. The Trudeau government is in this category.

One hundred years ago Christians were part of the progressive movement and sought social reform, like Prohibition. Today’s version of progressivism is infused with secular humanism and cultural Marxism, which means they seek to redefine key things like nationhood, citizenship, sex, gender, marriage, family and even theology.

Modern progressivism can also be very divisive, pitting whites against blacks, women against men, the ‘masked’ against the ‘unmasked,’ and now the ‘vaxxed’ against the ‘unvaxxed.’ Political power becomes intoxicating and there’s nothing like a public emergency – war or a pandemic – to gain it.

If you give politicians more power in an emergency, they will create more emergencies to get more power — Source Unknown

There is also the second Canada, or ‘Populist Canada’ or Neo-Liberal These are the native Anglo-Canadians plus the migrants who love being Canadian. They believe in values of the Anglosphere (human rights, freedoms, and equal protection of the law), as well as traditions, customs, family, nation-state patriotism, and faith. Many are working class people. The Freedom Convoy is in this category.

The convoy standoff with the Trudeau government could peacefully end in ten minutes. Lift the mandates, as some of the Canadian provinces are already doing, and every one can go home.

What has been the response of the Trudeau government to the Freedom Convoy? Condemnation and alarm. The prime minister, who said #ThankATrucker, resorted to denigration and name calling – referring to ‘these people’ are misogynist, racists, and white supremacists. He refused to talk with them, especially because they are a ‘small fringe minority’ who ‘hold unacceptable views.’ Following this came the threats.The prime minister activated the 1988 Emergencies Act, which was intended for war, civil strife and insurrection. Truckers can be arrested, rigs confiscated, bank accounts frozen. Violators can be fined CAD 5,000, face five years in prison, or both. Even American donors to the convoy are being threatened. Convoy leaders made a conscious decision to withdraw from the capital as a police crackdown descended on the protestors.

Remember that Canada has a Charter of Rights and Freedoms (1981). It starts out with the words: “Whereas Canada is founded upon principles that recognise the supremacy of God and the rule of Law.”

Clause Two: Fundamental Freedoms: Everyone has the following fundamental freedoms: (a) freedom of conscience and religion; (b) freedom of thought, belief, opinion and expression, including freedom of the press and other media of communication; (c) freedom of peaceful assembly; and (d) freedom of association. Notice how much the word ‘freedom’ is used?

Who honours the Charter of Rights more: Progressive Canada or Populist Canada? You be the judge.

What should the two Canadas do to avoid the earthquake?There should have been serious negotiations between the two parties to find common ground, conducted in good faith with mutual respect. However, there is no circumstance – or excuse – regarding this convoy that precludes face-to-face talks. Diplomacy, statesmanship, and maturity can do wonders in resolving conflict. The Charter of Rights should have been upheld and the Emergencies Act rescinded.

That, of course, is not what happened. Instead Ottawa police, with a strong if not brutal arm, came in and dispersed the convoy in the capital. Is it the end? Unlikely. But the short-term future is uncertain and unstable. It didn’t have to be that way.

In the absence of negotiation, diplomacy, resolution, Progressive Canada and Populist Canada will be interlocked like tectonic plates and the pressure is bound to increase. If it gets to the point of snapping, then comes the earthquake.

How should Christians worldwide respond? Of course, we need to pray, but it helps to have ‘informed prayer.’ May we be like the sons of Issachar, ‘understanding the times’ so we know what to do? (1 Chronicles 12:32).

‘Peacemaking’ (Matthew 5:9) and the ‘ministry of reconciliation’ (2 Corinthians 5:19-20) between the two Canadas would be invaluable. The Church can and should take the high ground in exhibiting grace, maturity, and respect for all parties. Couple all this with fervent prayer and we have a fighting chance to see two Canadas become ‘one,’ ready and primed to be part of a last days global revival (Acts 2:17).