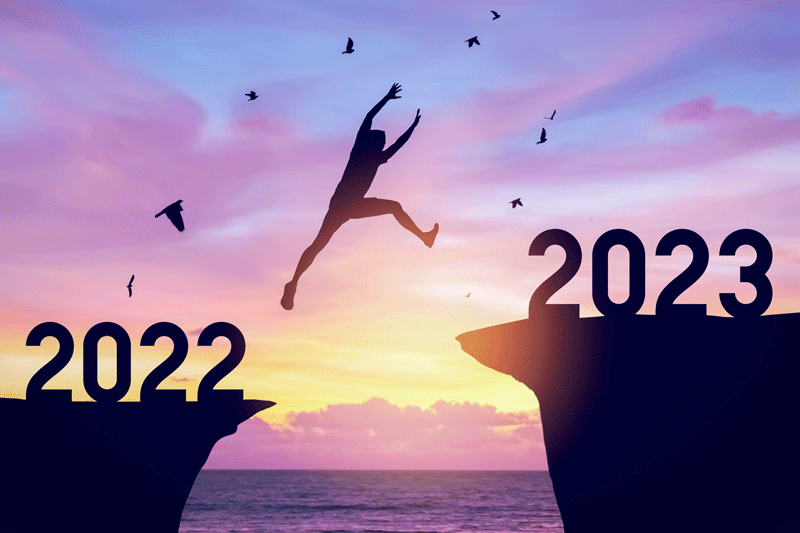 For many, the last three years have been a roller-coaster ride. Will 2023 be any different? In our lead article, we highlight some of the places you need to watch and pray, plus some practical principles to make yourself more ‘future-ready.’

The 2020s have been a decade unlike anything we have seen in living memory, even surpassing the turbulent 1960s. For many people, it has caused a lot of fear and much of it is misdirected. People are afraid of global warming, environmental apocalypse, and being called pejorative names like racists, misogynists, etc. The rise of ‘wokery,’ ‘wokeism,’ or just plain ‘woke’ – now in overt overdrive – with its punitive cancel culture, causes much trepidation.

Yet, as someone put it: the only fear you need is the fear of the Lord; once attained, it will cancel out all other fears.

In this article, we will give you a few places to watch – and pray – as well as some practical tips on how to handle the future.

Western civilisation, based on Greek telos, Roman jurisprudence, and most of all, Judaeo-Christianity, has lifted many out of poverty, recognised human rights, respect for the individual, granted equality of opportunity and unparalleled freedoms, and fostered science and technology, is in danger of collapse. Declining morals, the proliferation of lying, and the lawlessness it fosters are the major factors of such fragility.

This tragic war among fellow Slavic Orthodox brethren has been a major challenge for the West, revealing great levels of corruption, frustrated globalism, and NATO’s impotence. The danger is of this land war – the largest in Europe since 1945 – will broaden and involve nuclear weapons. Let’s pray for a quick, peaceful settlement.

This important nation may be on the threshold of ‘nuclear breakout’ and thus pose a threat to the region and the world. Yet the ‘anti-hijab’ protests have made the regime uncharacteristically vulnerable. Its relationship with Turkey, and possibly Russia, could channel them into a prophetically significant alliance. With a new Netanyahu government in Israel, there may be either more tension or more detente.

A growing regional and world power, this ambitious nation continues to lodge bellicose rhetoric against Taiwan and the West. Yet indebtedness, a failed zero-Covid policy, and even ‘Covid protests,’ have put the People’s Republic in an uncharacteristically perilous state. Air flights from China are recommencing and we pray it won’t spread more Covid.

The death of Queen Elizabeth II on 8 September 2022 was the end of an era. She was the embodiment of the ‘best of the West,’ and her words and deeds emanated from a solid Judaeo-Christianity stance. King Charles III has gotten off to a good and energetic start – affirming that he really is ‘The Defender of The Faith’ – and promising to be politically neutral, the UK is heading for uncharted waters. Charles at 74 will be a transitional monarch and William, heir to the throne, appears to be religiously and politically neutral, though he is sympathetic to climate activism. Yet despite the smooth transition and stability of the monarch, UK politics has been turbulent with three prime ministers in 2022. Will the change of monarchs and the current economic and political cauldron lead to the reversing of Brexit (or is it too late for that)?

There has been much concern over many political and social issues. In less than two years, despite the threats of inflation, deflation, and stagflation, Congress and the White House have gone on an unprecedented spending spree of $6 trillion – money they clearly don’t have. The culture war has reached a new level of intensity as the woke duel with traditionalists and nationalists for the heart of the nation. And let’s not forget there is a strong spiritual dimension to all this that only a Spirit-empowered church can address.

PRAY: For all the above nations, and the world, pray for peace, stability, and wisdom for leaders, and that God’s will be done.

Prudence: Taking note of future trends and wisely preparing for them. Proverbs twice says that the prudent man can see the evil and hides (22:3; 27:12). They become a ‘small target.’ Joseph in Genesis showed prudence in famine preparation when he stored the bumper crop of wheat during the seven good harvest years. Since the 1990s our ministry has sought to give insight for today and hope for tomorrow. To wisely prepare ‘for the rainy day’ is prudence. Have some cash safely on hand, diversify where you store your money, have extra food supplies, stock up on essentials, have candles, flashlights, blankets and other common sense things (and pray you won’t need them). All these are the marks of prudence.

Perseverance: The battle since 2020 has been long and draining. Fatigue and fatalism have set in and people want to give up. Don’t do it. You are faithfully serving God through your perseverance. Galatians 6:9 is the key. Winners never quit and quitters never win.

Fear of the Lord: This is your ticket to a brighter future in any era. The most important thing you can do is invest in your spiritual life. That means putting God – His kingdom -and His righteousness – as your Number One priority. For those who do the promise of God is clear and sure – He will provide you with all the necessities of life (Matthew 6:33). This ministry has lived by this verse for many years and can testify to its power and veracity. Three areas to focus on.

Keep these things in mind and put them into practice. You will find that 2023 brighter than 2022 – guaranteed (Proverbs 4:18 KJV).