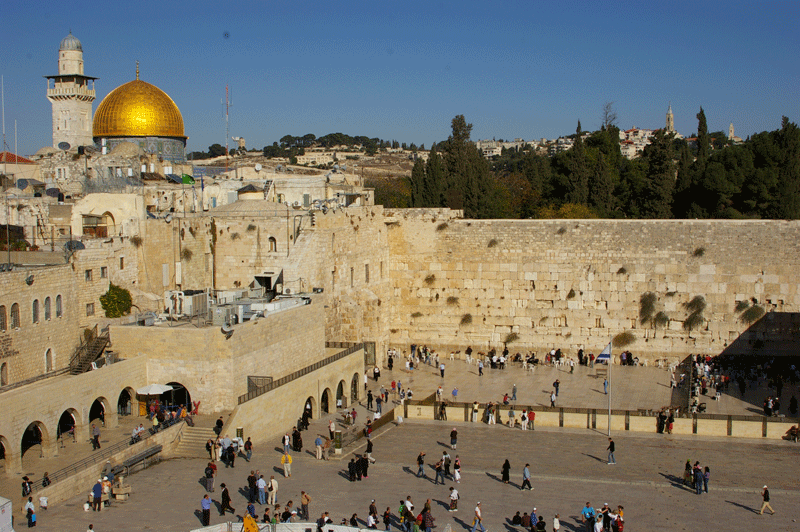 It is mentioned one thousand times in the Bible, making it the chief city of the Scripture. To understand the city of Jerusalem is to understand the Bible, world history, current events, and prophecy. Part 01 deals with the first thousand of four thousand years of history.

Thus saith the Lord GOD; This is Jerusalem: I have set it in the midst of the nations and countries that are round about her — Ezekiel 5:5

It is arguably the most famous city in the world – a household name even in remote places like the highlands of Papua New Guinea or the jungles of the Amazon. It has four thousand years of history of which the first thousand was heathen, the second thousand Israelite, the next two thousand Gentile, and then after the June War of 1967, the city returned to Jewish/Israeli rule.

This six-part series will look at Jerusalem – historically and prophetically. When we understand Jerusalem, we better comprehend the will of God.

The first time Jerusalem is mentioned in the Bible by name is in Joshua 10:1. Adonizedek formed a coalition against the royal city of Gibeon, for having the audacity to make a league with Joshua and Israel. He is referred to as the ‘king of Jerusalem.’.

Despite its lack of mention in the Torah/Pentateuch, Jerusalem is undoubtedly the chief city of the Bible. It’s explicitly named eight hundred and eleven times. In addition, it has other names like:

When you tally up the references, it amounts to a thousand times Jerusalem and its synonyms are found in Scripture. In contrast, the city of Babylon – the spiritual rival to Jerusalem – is cited two-hundred and fifty-two times.

The Glory of Zion

It is impossible to understand Jerusalem’s significance without mentioning Zion. Are Jerusalem and Zion the same thing or are they distinct?

The name ‘Zion’ needs special emphasis. Often associated with ‘Zionism,’ though ultimately it has a spiritual, prophetic side that is above politics. Zion has several meanings in Scripture, depending on the context. The word is used one-hundred and fifty-two times in the Bible, along with Sion nine times (KJV).

Thus, while Zion’s exact meaning is uncertain, it has become synonymous with Jerusalem, Israel, and the Jewish people. Significant as these points are, Zion goes to a whole new level when referring to Almighty God Himself.

Psalm 132 gives great insight into the significance of ‘Zion.’ We learn that God has chosen it (v. 13), desires it as His habitation (v. 14) – His local earthly address; He desires it as his final abode above all other places (v. 14); the lamp of God’s anointed (David and Messiah, son of David) will be there.

In light of Psalm 132, and other Scriptures, Zion’s greatest glory is this: It is associated with God’s literal dwelling place on earth; His local earthly snail mail address. The phrase, ’The Lord Dwells in Zion’ is found in the following verses: Psalm 9:11; Psalm 135:21; Isaiah 8:18; Joel 3:21; Isaiah 33:5.

In summary, Zion appears to be a royal city, or at least the royal section of the city, where the King of Israel will live. Zion/Jerusalem is a holy city, where the God of Israel dwells, too. For Messiah is the Son of David and Son of God, the heir who will sit on David’s throne and rule from the holy city.

Since God has chosen Zion for Him and His King to dwell, you can be sure that the forces of darkness will do their utmost to foil the divine plan. If it were possible, they would try to keep the King out of Zion. Like Psalm 2 and Zechariah 12, 14, we begin to see a picture of why the nations are so restive and concerned about Jerusalem. These passages are the beginning of understanding why Jerusalem is the burdensome stone. Either Zion will be God’s capital or that of an anti-God, anti-Christ force.

While the first millennium of Jerusalem was not in Israelite hands, it is mentioned by implication in the following event: