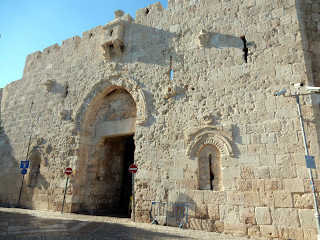 Last month, we learned that Jerusalem is the Number One foreign policy issue and will get increasingly more global attention in the days ahead. We also reviewed Jerusalem’s history from the time of its founding 4,000 years ago until the time of Christ. We continue.

David in 1,000 BC made Jerusalem his royal city and the holy city. A millennium later Jerusalem in the 1st Century AD welcomed Jesus of Nazareth on His triumphal entry. They uttered Messianic cries of ‘Hosanna to the Son of David, Blessed is He who comes in the Name of the Lord.’ Yet, less than one week later, this same city turned on Him with fury. He was betrayed, arrested, mocked, condemned, and crucified on a rugged Roman cross. His crime was written on a sign nailed above His head: ‘Jesus of Nazareth, the King of the Jews.’ Christ, Son of David, was being crucified because He was a king and Rome would only tolerate ‘kings’ that were propped up by them, including the puppet Herodian dynasty.

Jerusalem Chronology: Decades later in 70 AD, David’s 1,000 year old capital was destroyed by the Romans, Herod’s temple was burned to the ground, and the Jewish people dispersed. From the time of the Roman destruction and the end of Jewish autonomous rule, Jerusalem was occupied by a series of rulers, including:

• Byzantine Period (325 – 638 AD): This was a period of Roman Christian rule from the capital of Constantinople; the Persians temporarily occupied the city in the 7th Century AD.

• Arab & Muslim Period (638 – 1099 AD): This was under the Umayyads and Abbasid Islamic empires; the Dome of the Rock and al Aqsa Mosque were built on the Temple Mount late in the 7th century.

• Crusader Period (1099-1187 AD): The Christian crusaders from Europe conquered the Holy Land in 1099 AD. The Dome of the Rock and Al Aqsa Mosque became churches during this era; the last crusader kingdom came to an end when Acre fell in 1291;

• Ottoman Turkish Period (1517 – 1917 AD): Sultan Suleiman the Magnificent rebuilt the Old City of Jerusalem’s walls, which are the ones we see today (1538-1541). Apart from that, the city languished for four centuries;

• British Mandatory Rule (1917 – 1948 AD): The League of Nations, incorporating the November 2, 1917 Balfour Declaration, awarded a mandate in Palestine to the British. It is a modern concept, an ‘occupation with an expiry date,’ to prepare country for independence;

• Divided city (1948 – 1967 AD): During the first Arab-Israeli war of 1948, known in the Jewish state as the ‘War of Independence,’ Israel captured West Jerusalem and Jordan the Old City, Mount of Olives, and eastern suburbs. The border inside Jerusalem was along the western wall of the Old City (not the Western ‘Wailing’ Wall), scarred with barbed wire, mine fields, and sniper fire. Residents could not cross from one side to the other;

• Reunification (June 7, 1967): At the height of the Six Day War, the Israel Defence Forces captured the Old City and Mount of Olives and reunited the city. By the end of the month, Israel annexed the eastern sector, declared Jerusalem as its indivisible, united, and eternal capital.

When it came to future peace talks with the Arabs, Israel declared ‘Jerusalem is not negotiable’ and this was its policy for 33 years. In the year 2000, at the Camp David peace summit between Israel’s Ehud Barak and Palestine Authority President Yasser Arafat and hosted by US President Bill Clinton, the status of Jerusalem was put on the negotiation table for the first time. Barak was willing to divide the city if it would lead to permanent peace. Though Arafat rejected Barak’s proposal, from that point onward Jerusalem never left the negotiating table. This move ensured that the nations would become even more involved in the affairs of the holy city than ever before.

Now that international interest is at an all-time high, the nations will discover that Jerusalem is a burdensome stone for all people (Zechariah 12:3). To be continued.

A Burdensome Stone: Jerusalem and the Middle East in the Age of Trump (updated) will be the topic of the upcoming third annual, Australia-wide ‘Understanding the Times’ speaking tour. Click on to the link below for the schedule.