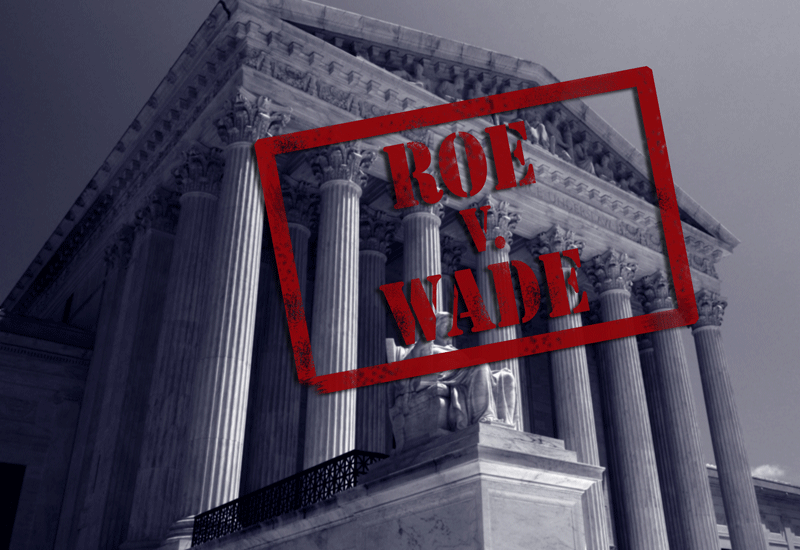 High fences, protests at justices’ homes, interruption of church services – all this is because a leaked draft of a US Supreme Court decision looks like they will overturn Roe v. Wade. This was the 1973 Supreme Court decision that mandated abortions in all fifty American states. Yet Roe was more than merely about abortion: it was probably the first shots of a nation wide-culture war. It’s potential overturning would cause America, and the western world, to ‘turn a corner.’

As soon as the word was out, three metre high fencing was erected around the United States Supreme Court (SCOTUS) building. Church services were disrupted by protesters, pro-lifers and there facilities attacked. On cue, Democratic politicians lined up to denounce the news, some with great fanfare, anger and militancy. On top of it all, angry protesters stood outside the private homes of SCOTUS justices, which, according to former Attorney- General William Barr, is a crime (18 US Code Section 1507). And the reaction was not limited to the United States – there was signage in Brisbane, Australia, about a meeting to ‘save Roe.’

What is the cause of all this turmoil?

In an unprecedented move, an anonymous clerk at SCOTUS leaked a draft major opinion on the Dobbs vs. Jackson Women’s Health Organisation (Mississippi) abortion case. In this draft a majority of five justices agreed, in principle, to overturn the 1973 Roe v. Wade SCOTUS decision. With the possible demise of Roe, the American left is on an even greater war path.

What is Roe? On 22 January 1973, the very day former US President Lyndon Baines Johnson died, in a seven to two majority, the all-male SCOTUS of that day voted to legalise abortion in all fifty states. Until that date, a few states already had legal abortion – after the decision all states had to allow it, at least in the first trimester. In other words, seven justices mandated abortion for all fifty American states, whether they liked it or not. The ruling was called Roe v. Wade and America has not been the same since.

Since the US Constitution is virtually silent on the issue of abortion, how did seven justices justify the constitutionality of this sweeping ruling? Using a process called ‘substantive due process,’ they ‘discovered’ an implicit ‘right to privacy’ in the 14th Amendment of the Constitution. This amendment was  ratified right after the Civil War and guaranteed all Americans, include black Americans, the right to life, liberty and property. No where is a right to privacy even mentioned, there or anywhere else.

The 9th Amendment says you have rights beyond the Constitution, the 10th Amendment says that where there is no explicit constitutional right, then it is up to the individual states to determine what rights to affirm or deny. That’s why abortion had been decided by the states, until 1973

Who gets to decide these ‘implicit rights?’ Americans at the ballot box or unelected jurists in black robes? Which is more democratic? Which affirms freedom and which nibbles away at it?

SCOTUS is meant to adjudicate as per the US Constitution. They have no authority to create a ‘right to privacy’ out of thin air, or conduct de facto legislation from the bench.

The 1973 justices believed Roe v. Wade was a ‘compromise,’ giving something to both pro-life and pro-abortion advocates. To the abortion lobby, the practice would be allow unhindered in the first trimester; to the pro-lifers, there would be more state restrictions as the trimesters went from first to second, second to third. The hope was that Roe would ‘settle the abortion issue.’

Roe did not settle the issue at all; it inflamed it instead. The trimester formula was abandoned. Abortion could be obtained in all trimesters, including late-term abortion. Roe v. Wade was like the 1861 firing of Fort Sumner in South Carolina, which commenced the Civil War – Roe was the first shots of the protracted cultural civil war, that continues to this day. Even the late pro-abortion SCOTUS Justice Ruth Bader Ginsburg was credited of saying about Roe: “(It) halted a political process that was moving in a reform direction and thereby, I believed, prolonged divisiveness and deferred stable settlement of the issue”.

Has America become a better country because of Roe? For starters, a staggering sixty-three million abortions have been performed since 1973; these represent lives, not mere statistics. The culture war Roe kickstarted continues to tear America apart. Abortion is as emotive and divisive today as slavery was in the 19th Century. In both cases, the personhood of the slave and foetus was denied. Cultural Marxism, which undergirds radical feminism, has destroyed lives and families in the process.

When it comes to the US Constitution, culture warrior leftists deny rights that are clearly written in it, like ‘free speech’ and ‘gun ownership’ clauses. Yet at the same time they declare implied or non-existent rights, like of privacy, are part of the document.

What happens if Roe ends up being overturned? What is the bigger picture? What does the future hold? We will explore these things in part 02