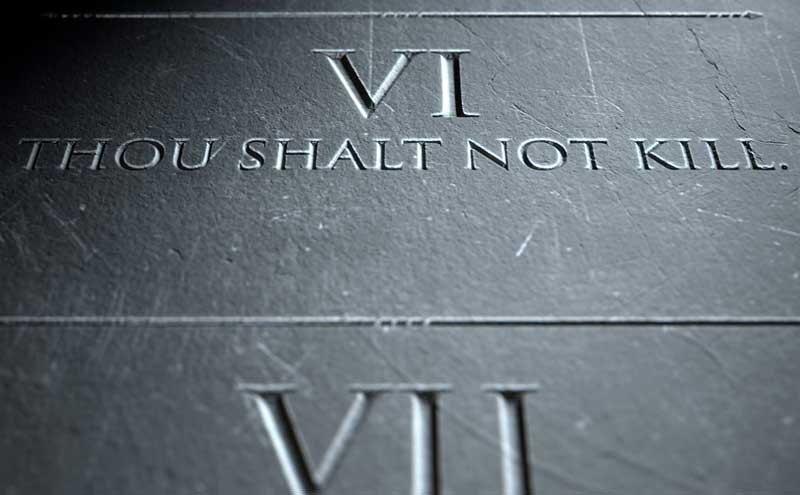 Thou shalt not kill.

It is simple and straight-to-the-point: You shall not kill. This commandment is found in Exodus 20:13; Deuteronomy 5:17; and reiterated and amplified in Matthew 5:21. Though brief, this commandment is very profound and speaks about the nature of God, the value of human life, and of a great evil that can destroy body and soul.

As we continue our series on the Ten Commandments, we focus on the sixth   command. Of course, we need to do a word study. The Hebrew word in Exodus for ‘kill’ is רָצַח (ratsach) which means to ’murder,’ ‘assassinate,’ ‘avenge,’ and ‘slay’ in a premeditated fashion.[1] So we can safely say that the sixth commandment means You shall not murder.

Regarding ratsach, it is one of 7 Hebrew words for killing. When it comes to proactive, premeditated murder, this is the most active word that is used.

In Hebrew and in English, there is a distinction between ‘killing’ and ‘murder.’ The former can include killing the enemy in a ‘just war,’ killing in self-defence, and for those who believe in capital punishment, this is state-sanctioned killing as a form of justice. Also, there is involuntary manslaughter (e.g. a person unexpectedly walks in front of a moving car) that is unfortunate but not considered as ratsach. The Torah provided sanctuary for the unintentional killer called a ‘city of refuge.’ On the other hand, murder has no moral, legal, or ethical justification and is to be strongly punished.

God explained to Noah about the connection between the value of man and the depravity of murder. The Lord said in Genesis 9:6: Whoso sheddeth man’s blood, by man shall his blood be shed: for in the image of God made he man. This is coming straight from the mouth of God. Blood represents life and the shedding thereof is death. It is such a serious crime that it calls for capital punishment: when you wantonly shed someone’s blood, you shall be slain in justice. Why? Because men and women are made in the image of God. When we bear this truth in mind, our treatment of others will improve manifold.

The first murder was particularly heinous because Cain, the first-born on the planet, slew his brother Abel out of bald-faced jealousy, since the latter’s offering was accepted by God and Cain’s was not (Genesis 4:8-11) After the murder, God gave Cain a mark so that no one would slay him (talk about mercy in the face of sin – we have no record of Cain repenting).

Biblical evidence is strong that God values the sanctity of life. We not only have the injunction of Genesis 9:6, and also the wise words of Proverb 6:17:   Of the seven things God hates and considers an abomination, includes ‘ … hands that shed innocent blood.’

Consider the following offences in the Law of Moses which are capital crimes:

We can say more … but God values life and hates murder. Next time, we will look at the sixth commandment from a New Testament Perspective.