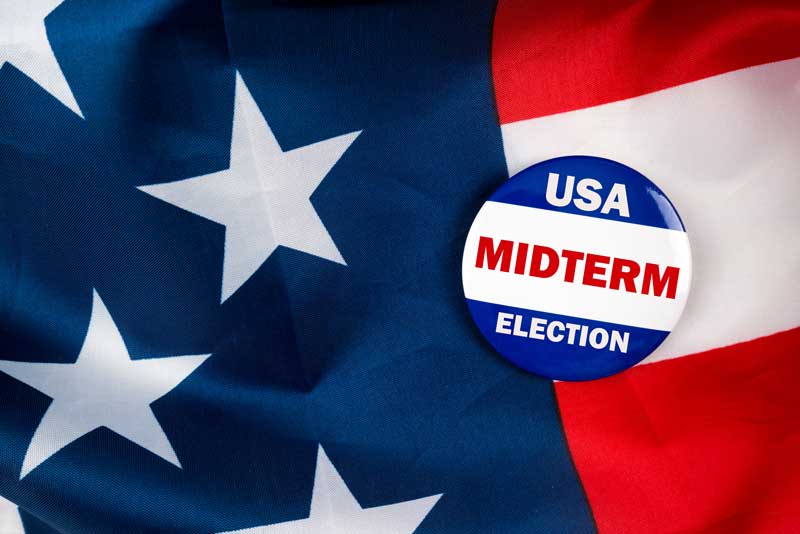 The Republican Party expected a ‘red wave,’ even a ‘tsunami,’ according to the polls. Yet the results were decidedly mixed. Midterms occur every four years when the President’s name is not on the ballot. Yet, could it have been a referendum on not one, but two, presidents, on the 8th of November? What went wrong and what went right? Learn more

The 8th of November 2022 was viewed with great anticipation. Why? It was the date of the United States Midterm with congressional, state, and local elections held across the country. This means that all 435 members of the House of Representatives and one-third of the 100 US Senators are up for election or re-election. During a midterm, the key person not on the ballot is the US President.

The 2022 midterm was meant to be a ‘red wave,’ ‘tsunami,’ and ‘blood bath,’ according to the polls. The Republican Party (the reds), also known as the GOP (Grand Old Party) is the approximate equivalent to the Liberal-National Coalition in Australia and the Conservative Tory Party in the United Kingdom. The GOP was looking to mop up the US Congress. There were predictions of flipping 30, 40, and possibly up to 100 seats in US House of Representatives. Trump-endorsed candidates – he recommended around 235 – known as MAGA (Make America Great Again), were outperforming establishment Republicans in the primaries.

There were reasons for the GOP’s upbeat assessment. Polls say that 73% of Americans are unhappy with the direction of the country, dominated by Democrats in Congress and the White House. It is not hard to understand why. Inflation is rampant, drugs are proliferating, petrol prices are at an all-time high, there is human trafficking, shortages of baby formula and other necessities, more violence, a confusing and botched government response to Covid, multi-trillion-dollar spending bills, an unsecured southern border, and emboldened international rivals. The open southern border is also the gateway for 96% of fentanyl, killing one hundred thousand Americans annually. Add to that an alarming rise in crime, especially in major American cities and an epidemic of ‘wokery’ and cancel culture.

Thus it is not surprising that Joe Biden’s approval rating was below 40%. Though the US Presidents are not officially on the ballot during the midterms, it is usually a de facto referendum on his performance. Far more articulate and charismatic presidents like Bill Clinton and Barack Obama got ‘shellacked,’ – to use Obama’s term – when Clinton lost 54  House seats in the 1994 midterms and Obama 63 seats in 2010. Donald Trump lost 41 House seats in the 2018 midterms (which returned Nancy Pelosi to the speakership of the House of Representatives). The House speaker is the third highest-ranking office in the land, after the President and Vice-President). With so many negative indicators and low approval ratings, it is easy to see why the Republicans were ultra-optimistic. A few cautious Republican voices tried to dampen down expectations but to no avail. Many on the right expected a river of red to flow.

So what happened? The Democrats (the blue party) did better than expected.

While some Trump – MAGA candidates did very well but others did not while some narrowly lost their races. One expert estimated that Trump’s endorsement won 90% of their seats.

What happened to the red wave?

Here are things to consider:

Spending: Reports say that the Democrats outspent the Republicans three to one. Two of their largest Democrat donors included George Soros, in his early nineties, followed by Sam Bankman-Fried, age 30, who gave $40 million. He founded the now-bankrupt crypto-currency firm called FTX.

Democrat Unity: Another factor is that the Democrats were united – just the thought of a return of Donald Trump gave them nightmares. They also pounded the anti-MAGA message that they are armed white nationalists – in love with guns, God, and American flags. This alarming warning against Trump and the MAGAs has apparently stuck with some voters.

Winners – Infirmed & Deceased: A small but sure blue stream meandered through the body politic were candidates like John Fetterman, the winner of the Pennsylvania senate race against celebrity doctor Mehmet Oz. Fetterman had a stroke a few months ago and it has markedly affected his speed and coherence, yet he won anyway. Could this be thanks to the ‘early voting option’ in Pennsylvania, which is often favoured by the Democrats?

Have you heard of Tony Delucca of Pennsylvania; Barbara Cooper of Tennessee, and Simon Filbert of California? All three of them have something in common. All are Democrats. All three of them are deceased. And all three won their respective races despite being dead at the time of the election. Again, could ‘early voting’ hold the key to a stone-cold victory?

Divided Republicans: Then there’s the GOP – they are divided as the Democrats are united. Different sects include the establishment ‘country club’ Washington-insider Republicans, the RINO Republicans (Republicans In Name Only), neo-con Republicans (former leftists who believe in international intervention, even war, to impose western liberal values and democracy), and the ever-never-Trumpper Republicans. An emerging group is the ‘I like Trump’s policies but prefer Ron DeSantis’ Republicans. Then there are the MAGA people and they are the growing block in the party.

GOP Party leaders like Mitch McConnell in the Senate, Kevin McCarthy in the House, and Ronna McDaniels, GOP chair, are being blamed for the disappointing results and are being challenged for their positions. Some have suggested that these leaders may have gone further – either neglecting or sabotaging the election of MAGA Republicans.

Fraud: A couple of other points: there was widespread scepticism on the integrity of the 2022 midterms, just like there was with the 2020 presidential elections. Eyes are especially on the state of Arizona, which also was in the eye of the storm in 2020. This time there were widespread reports of voting machine malfunction – upwards to 60%; turning voters away; mixing ballots, and taking over two weeks to count ballots – all lead to the conclusion that this situation, at the very least, should be investigated. The Democratic gubernatorial candidate Katie Hobbs, is Arizona’s Secretary of State. She refused to recuse herself from the election process, though it meant she was counting her opponent’s votes. Arizona’s election may be easily described as a verifiable case of voter suppression.

Finally, the reasons for mixed election results have to do with the voting bloc of younger people ages 18-29 (31% turnout). Two-thirds of them voted Democrat – the potential of student loan forgiveness, temporary petrol price reduction due to the releasing of reserve oil, and ‘threats to our democracy,’ the overturning of ‘Roe v. Wade,’ got them off the couch on into the ballot box (or mailbox or dropbox). Unmarried women voted Democrat by 37 points, though there is probably overlap between this group and younger people.

In summary, the GOP is disappointed because they didn’t win more while Democrats are delighted that they lost less.

The GOP did have some important wins. They captured the House of Representatives and thus Nancy Pelosi will not be wielding the gavel anymore. Many red state legislatures now have GOP ‘supermajorities’ which means that if they pass legislation and the governor vetoes it, they can override it his or her veto. In other words, supermajorities are veto-proof.

Less pronounced but no less significant that blue courts and school boards were flipped to red, especially with the emergence of a new voting bloc: Parents. They are alarmed and motivated to stop what they believe to be the indoctrination of their children in the public schools. Democrat Terry McAuliffe, who ran again for Governor of Virginia in 2021, said publicly that parents should have no say in how their children are educated – it cost him the election. His challenger, Glen Youngkin, championed the parents’ concerns and won the election. Lesson: Don’t cross the parents.

Rising stars in the Democrat party – ones who would be considered candidates for high-profile leadership, lost their respective governor’s races, namely Beto O’Rourke in Texas and Stacey Abrams in Georgia. This is not their first loss and it could possibly be their last election.’ All in all, the Republicans won three million more votes nationwide than the Democrats.

What can the GOP majority in the House of Representatives do? Without bi-partisan support in the Senate – which is in the Democrat’s hands – and the White House is also Democrat – it will be impossible to pass legislation. What they can do is investigate the weighty yet unanswered issues of the day. They are promising to be robust in their investigative power.

Brazil: Yet it wasn’t just the Americans who went to the polls in November. Two other elections had major global implications. In Brazil, there was a high-profile and controversial election. The incumbent president was Jair Bolsonaro, a Brazilian populist leader called the ‘Trump of the tropics,’ who ran for re-election. The other was former president Luiz Inácio Lula da Silva, who served from 2003 to 2010. Lula went to prison for corruption, then was acquitted, released, and ran in the 2022 Brazilian presidential election. It was reported that Lula narrowly won over Bolsonaro, yet there were reports, perhaps widespread, of large-scale corruption in the election process. Mass protests, perhaps in the millions, have occurred and apparently are unreported by the mainstream media.

Israel: Another important election held on 1 November 2022 was in Israel, the nation’s fifth election in less than four years. While other recent elections failed to reveal a clear winner, this time was different. Former Prime Minister Benjamin Netanyahu performed reasonably well, netting 64 seats in the 120-member Israeli parliament, the Knesset. This may not seem like a lot but it is clearly sufficient to mandate Netanyahu to form a coalition (the proliferation of political parties makes a ‘hung parliament’ a certainty with every Israeli election). Why the different outcome? Netanyahu, the longest-serving prime minister in Israel’s history, was out of office in the previous government. This dovish, left-of-centre, coalition with Naftali Bennett as prime minister, was unwieldy, diverse, weak and destined to experience an early death. It lasted a little over a year. People decided to stay with the man they knew.

What’s even more remarkable is that the left-of-centre parties polled poorly. The Israeli Labor Party, which was the political home to David Ben-Gurion, Golda Meir, and Yitzhak Rabin, was reduced to a rump of a mere four seats. Ouch! And two strongly leftist parties who were in the Knesset for many years – Meretz and Balad –  failed to win even one seat.

Could it be that the red wave flowed, not out of DC, but Jerusalem?